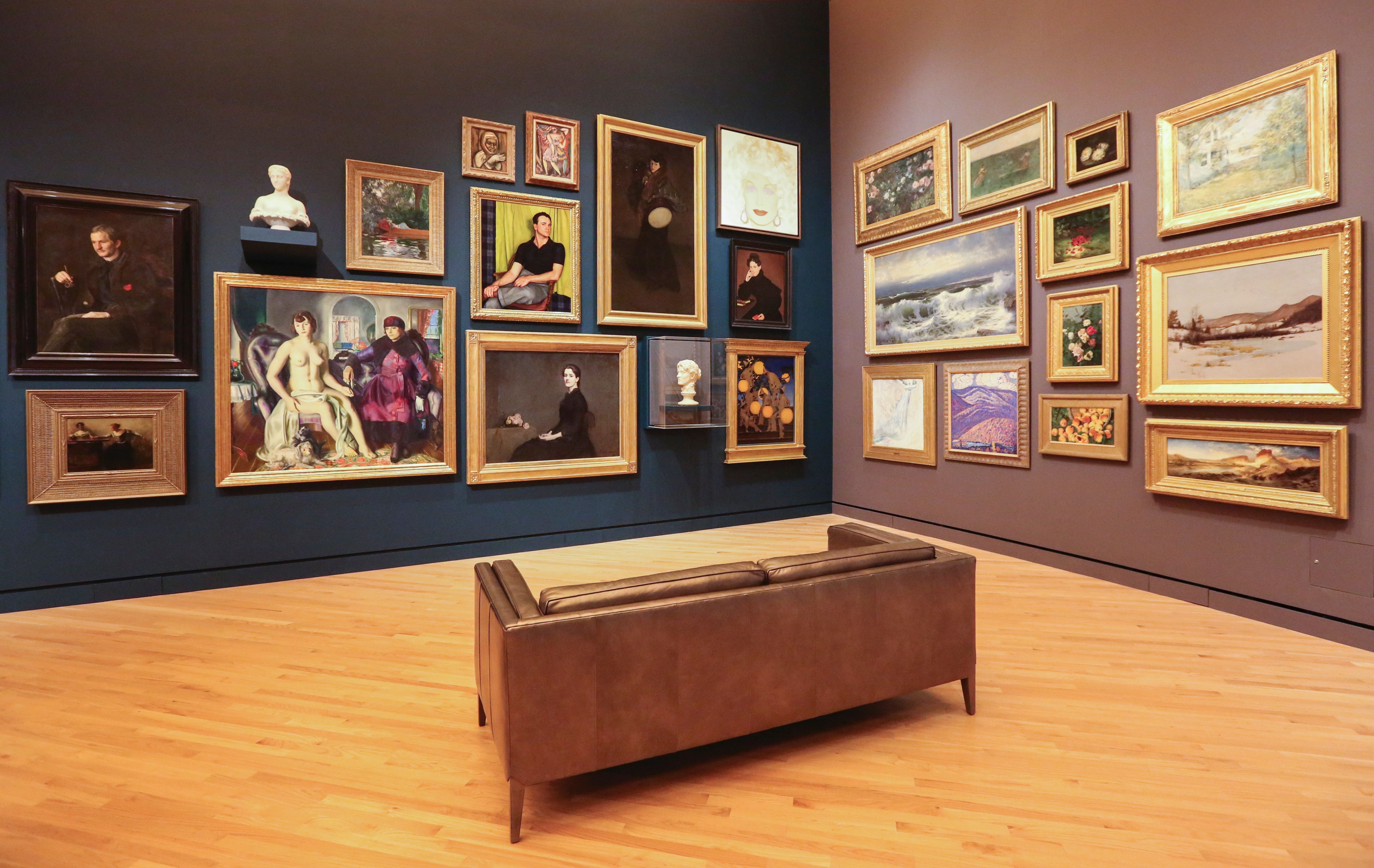 These ten outstanding visual artists were selected to be a part of Art & Literary Festival 2020—and all of them are local.

And during the festival, visit Joslyn Castle's gardens to view a special sculpture exhibit by Michael Elizabeth Johnson. Special thank you to Union for Contemporary Art for making this collaboration possible.

Click the images in the gallery to view them in larger form!

Pamela Conyers Hinson creates art that speaks to cultural diversity, gender and social issues. The ideas for her artwork originate from the artist’s experiences in her cultural community and the different cultural communities that she encounters. She has taught art to diverse populations such as at-risk teens, death row inmates, school teachers, and students. She has traveled across Nebraska accompanying statewide exhibits from the Sheldon Museum of Art to teach art in rural communities. Additionally, she served as a teaching artist at Joslyn Art Museum and is on the Nebraska Arts Council’s Artists in Communities and Schools roster. In 2018, she was a fellow at the Union for Contemporary Art.

Michael Elizabeth Johnson is an Omaha-based, trans artist. Through a practice based in soft sculpture, colorful theatrics, and bird watching, their work accentuates and transforms the natural world. They invite audiences to play and think creatively about how the world can be transformed for the better during this fluctuating time.

Keys has been an Animator for 20+ years and has also spent several years as an Art Director in the video game industry. His animation experience spans traditional drawn animation for TV, commercials and feature films through to CGI and Visual Effects feature films to Games and Virtual Reality. Some of his film credits include: Balto, Shrek and Lord of the Rings the Two Towers. Keys worked in the video game industry as an Art Director for Electronic Arts and Gameloft, where he shipped multiple titles on console and mobile. He also headed up R&D and incubation teams focused on prototyping and original new IP development.

Keys has had a passion for learning, mentoring and teaching throughout his career. He is currently on the Roster of Artists for the Nebraska Arts Council and has mentored for the Joslyn Art Museum through the Kent Bellow’s Mentoring Program. He has taught Cinematography and Visual Storytelling at Hastings College and has provided live demos on animation to the residents at The Bemis Center for Contemporary Arts. He currently teaches and mentors for the 402 Arts Collective and at Metropolitan Community College. He currently works from his studio in Omaha, Nebraska as an independent animator, illustrator, designer and creator of interactive experiences with a strong focus on visual storytelling.

Kristin Pluhacek lives and works in Omaha, Nebraska. Her drawings and paintings have been exhibited extensively in Midwestern fine arts galleries and museums, and her work is represented in numerous public and private collections. She has participated in several public art projects and has led many project workshops, including the mural “Hanscom Postcard”, a collaboration between the UNO SummerWorks program and the Omaha Parks Department; the Lauritzen Gardens Lewis and Clark Interpretive Icon; and "Reach for Your Dreams", a collaboration between Mutual of Omaha, Campfire USA and the United States Swimming Association in conjunction with the 2008 Olympic Swim Trials. She is also the illustrator for the book, “Send Me Tulips” (Prisma press) and the set designer for “Raskol”, one of five 2012 Great Plains Theatre Conference Playfest plays. Kristin is a BFA graduate of Creighton University, a roster artist for the Nebraska Arts Council Artists in Schools/Communities program and a drawing instructor at Metropolitan Community College.

Sarah Rowe is a visual artist from Omaha, NE. She holds a BA in Studio Art from Webster University. Rowe works with a variety of media including canvas, wood, plaster, and hand sewn textiles. She is of Lakota and Ponca descent and utilizes traditional Native American imagery in her work. Rowe’s work transcends cultural boundaries, creating meaningful cross-cultural dialogues. She cofounded Sweatshop Gallery and has exhibited her work nationally.

Steve Tamayo is a traditional Sicangu Lakota artist whose family originates from the Rosebud Reservation in South Dakota. After graduating from High School in 1984, Tamayo enlisted in the US Army, serving in the 101st Airborne Division. After returning to Omaha in 1987, he studied the traditional arts of the Umonhon people under Howard Wolf. As a mentor, Wolf instilled in Tamayo a deep appreciation and knowledge of Umonhon art and culture. He learned the importance of traditional materials, construction and the history surrounding native artifacts and regalia. In 2000, Tamayo moved to the Rosebud Reservation, where he augmented his understanding of Northern Plains art; he earned his BFA from Sínte Gleska University in 2011 where he developed and taught the traditional arts program. He currently lives and works in Omaha.

Bart Vargas is a multi-disciplinary Artist and Educator from Bellevue, Nebraska. Vargas earned his Bachelor of Fine Art from the University of Nebraska at Omaha, and his Master of Fine Art at the University of Minnesota-Twin Cities. He creates playful, and thought-provoking objects and images that strive to act as artifacts and evidence of the early 21st century. Vargas has exhibited nationally and internationally, and his work can be found in many collections throughout the United States, Europe, Asia, and Australia. His works have also been featured in many publications including Sculpture Magazine, New American Paintings, and HGTV Magazine.

Wallace, a graduate of the University of Iowa, works with organizations such as WhyArts, which focuses on unique populations, especially those with disabilities. The artist celebrates art in service by matching projects and organizations whose missions converge, such as Opera Omaha, the Girl Scouts, the Intercultural Senior Center, QLI, and others who use creativity, find beauty, and tell stories.

She has illustrated for other authors, as well as writing and illustrating her own books, including Choose Your Days (Cinco Puntos Press) and Mr. Reginald and the Bunnies (Pomegranate). Choose Your Days won the Nebraska Children’s Picture Book Award and represented Nebraska at the National Book Festival in Washington, D.C. in 2018. Her book, Mr. Reginald and the Bunnies, was a finalist for the 2019 Children’s Picture Book Illustration Award from Foreword Reviews.

Wallace’s work as a fine artist includes many exhibits in the United States and Italy. Her work is held in private and public collections internationally. In Omaha, you will find her paintings at Anderson O'Brien Fine Art and in her studio at the Hot Shops Art Center.

Hugo Zamorano is originally from Los Angeles, California, where he first became interested in graffiti arts and hip hop. He knew from a young age that he was going to pursue a future as an artist. He attributes his early inspiration to Eric Carle’s A Very Hungry Caterpillar when he was exposed to his illustrations in kindergarten. He has continued with his ambitions by completing his BFA from the University of Nebraska at Omaha. He participates in numerous community art organizations such as A Midsummer’s Mural, Why Arts, and the Nebraska Arts Council Artists in Schools and Communities roster. In 2016, Hugo presented a TEDx talk about the positive force of Graffiti arts. He still resides in Omaha and has further developed his own style within the graffiti arts movement.