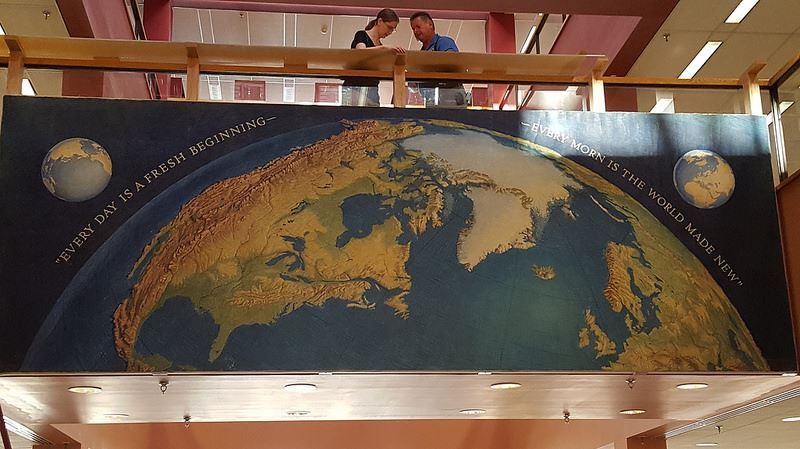 In 1946, Arthur Hayes Sulzberger, publisher of the New York Times, commissioned the prominent American artist, Eugene Kingman, to paint an inspirational mural for the lobby of the Times headquarters in New York City.

At the time, Kingman was about to be named the second executive director of the Joslyn Art Museum in Omaha. Sulzberger requested the mural show a view of the world as it might have been seen from space. In that pre-satellite image time, no one really knew what the world looked like from a distance.

He also requested that a line of poetry by Sarah Chauncey Woolsey be included in the mural: “Every day is a fresh beginning ̴ Every morn is the world made new.”

The mural was painted in Omaha at the Joslyn Art Museum. Kingman was helped with the map design by Richard Edes Harrison, the famed map maker from Fortune Magazine. The signatures of both Kingman and Harrison are visible on the mural. Upon completion, the mural was installed in the lobby of the Times in New York City where it remained until a remodeling in the late 1980’s when the mural was placed into the archives.

Under the direction of Maureen McCann Waldron, a group of Omaha area art lovers worked with the New York Times and the Kingman Family to bring the mural back to Omaha. Ownership of the Mural was transferred to the Joslyn Castle Trust in the fall of 2014.

Today, you can visit the Kingman Mural in the lobby of the Omaha Public Library – Dale Clark Branch downtown during operating hours and at no charge.

For additional information about the mural, its restoration, history, or ongoing educational opportunities, please contact us at info@joslyncastle.com or via phone at 402.595.2199.

More information about Eugene Kingman can be found here: http://eugenekingman.com/ 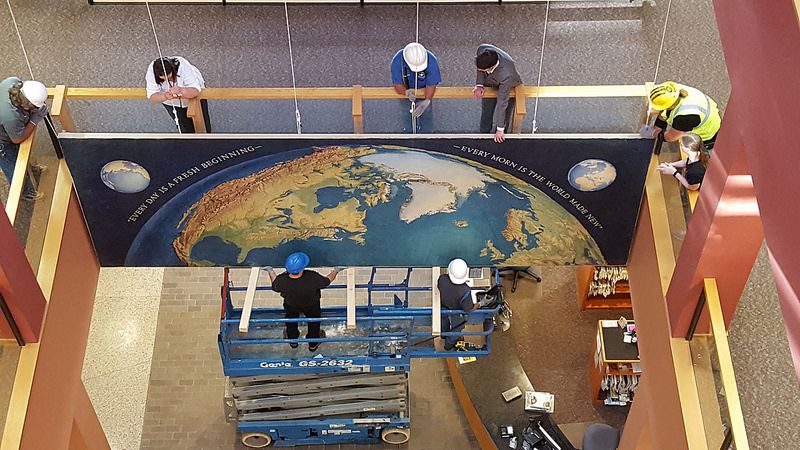 The Eugene Kingman mural being installed in the lobby of the W. Dale Clark Main Library on June 13, 2016.