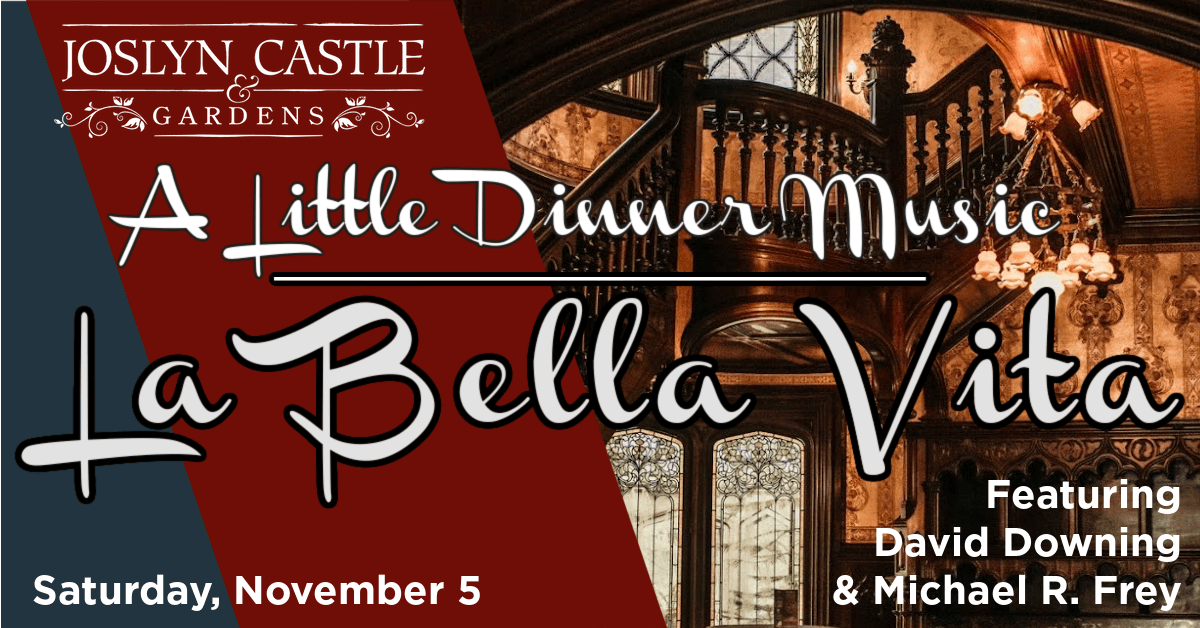 A Little Dinner Music combines fine dining with fine music—performed live! Enjoy an intimate dinner in one of the elegant rooms of Joslyn Castle. Your special night out will be accompanied by musicians performing from the central hall. Accommodations are available for parties of 2 to 12.

Select your table from the seating map

It’s Italian night again! Let us whisk you away to a charming café in Naples for some hearty Italian cooking! Your intimate dinner will be accompanied by Italian chamber music from Michael Frey on the violin and viola, and David Downing on the cello.

Michael R. Frey has been playing the viola professionally since the age of 10 with the Frey Family Quartet.  Raised in a musical family, his mother fostered a passion both for musicand music education.  Although prolific in both violin/fiddle and viola, he has primarily played the viola in the Lincoln (NE), Omaha, Sioux City (IA) and Peoria (IL) symphonies over the past 2 decades.  Beyond symphonic work, Michael has performed in the orchestra for various musical productions at the Orpheum Theater (Broadway Across America series), Rose Theater, Chanticleer, Bellevue Little Theatre and the Omaha Community Playhouse.  He has been with Millard Public Schools since 2002, first teaching 4th-12th grade orchestra; primarily at Millard South High School.  Currently he serves as the PreK-5th grade vocal/general music teacher at Reagan Elementary.

Grammy-nominated cellist David Downing studied at the Interlochen Arts Academy, the Harid Conservatory of Music and the Cleveland Institute of Music. After extensive studies, David walked away from the classical orchestra world - and the cello. Thanks to loving and supportive family, and friends, and his passion for creating music, David started performing again, and never looked back. Downing's work spans a number of styles from world, to folk, bluegrass, and hip-hop. As a recording artist, David has worked with Nas, Little Brazil, Flowers Forever, as well as the Omaha-based Americana band, Ragged Company, recording several albums. David's work has also been featured on NET's The Nature of Stories, and in a number of other film productions, art installations and documentaries. His depth of classical experience ranges from regular solo appearances to orchestral and chamber performances throughout the United States. His self-titled CD has won critical acclaim for his ability to use space and near-silence to his advantage” and his creation of "a colorful universe” - www.Beachsloth.com. David is the co-founder of the Bel Canto Duo (www.belcantoduo.com). The duo recently performed at the International Double Reed Society Conference, the National Music Museum, and for the Durham Museum Downton Abbey Exhibit opening. Other notable appearances include the Om Center, Omaha Fashion Week, Omaha Under the Radar, and the Blue Barn Theatre 30th Anniversary Celebration. David’s newest recordings, Unpaved Road and Cello Remastered are now available for purchase at www.downingcello.com David plays on an Anton Krutz cello.